I recently travelled to London, and for the first time in 30 years flew to London City Airport. Having experienced it I thought “Why have I waited so long?!”

The options when flying into London are: Heathrow, Gatwick, Luton, Stansted and London Southend. I suppose the practicality of them depends on which part of London you’re staying in. For example it has been useful for me to fly into Luton in the past. However, it does take approximately 45 mins to get into central London and you’ll be arriving North.

Gatwick offers the Gatwick express, which is no faster than a regular (therefore cheaper) train, and will take you about half an hour to arrive into central London, south. Heathrow is the easiest as it’s on the Picadilly line meaning you can travel on your Oyster card, but it will still take you about an hour to get into central London. Unfortunately, I’ve never flown in to London South End so can’t comment on it.

In terms of size, Luton airport is small and therefore really manageable. No real risk of getting lost or walking for half an hour to reach your gate, so you don’t have to plan for so much time before boarding. Security is very well organised, also streamlining the process. Gatwick is already a bit bigger though again, fairly manageable in terms of size. No need to mention how huge and full of people Heathrow is, I think you get the picture…

So here’s the great thing with London City airport: within 20 minutes you are in central London (east) at Bank or Tower 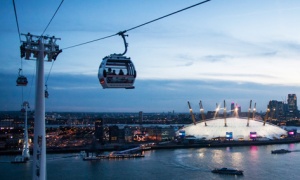 Gateway. Not bad at all! Not only that, but you get to make you way in on the DLR using your oyster card (costing only 3.50). The trip through East London is overground and is fascinating as you get to see the Excel Centre, the new “Emirates Airline” (the eggs taking you across the Thames), the Millenium Dome and then cruise into the Docklands and witness the gigantic towering offices before closing in on the more central part of London.

The airport itself is small and therefore once again means you have to spend less time queuing, waiting, walking… The security system is well organised and get this – the plastic bags for your liquids are free (unlike in Luton)! You also get free wifi, which is always nice in an airport.

Bottom line: never flying in to another London airport if I can avoid it, and I strongly recommend you try it at least once. There’s no going back!