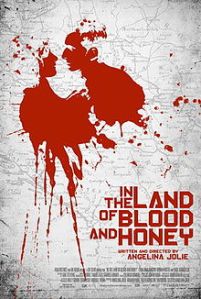 I first read about In the Land of Blood and Honey in Vanity Fair, in which there was a long article and a cover dedicated to Angelina Jolie. The article sparked my interest for the movie, and I was pleased to think that a star as huge as Angelina Jolie is, had chosen not to go for a cliché movie. Indeed, she could have gone for the style of movie she usually acts in, or she could have gone for a huge budget – lots of special effects – Hollywood production. Instead, she chose the theme of the Bosnian war, a subject that matters to her and that she felt deserved covering. I say, kudos to her. Similarly, she decided to choose local actors and the film was shot in Hungary.

The film tells the story of the Bosnian war, via a love story between our two main protagonists: Ajla and Danijel. It reminds us a bit of Shakespeare’s star crossed lovers from Romeo and Juliet (a comparison I read somewhere else), as their love is forbidden and they have to brave the war to be together. However, the climate of war and violence is very different from that set in Romeo and Juliet.

Ajla her family and friends are very early on confronted by the violence inflicted on them by the Serbs, whilst Danijel on the other hand is part of the soldiers who are sent to pillage villages, kill men and arrest women. It would seem that he does it against his will, but he nonetheless complies without complaining much.

Throughout the film, we are taken through the atrocities and complexities of this war, following the stories of our two protagonists, whose paths often cross. The film is not shy about showing violence openly. Men are shot, violently beaten and left lying dead in the street. Women are arrested, beaten, and repeatedly raped. However it seems that this it what Jolie wanted to depict and clearly put across the message about the atrocities of this war, that has not often been talked about.

Having been eager to see this movie, I have to admit that I was disappointed by it. The script has a lot of potential, and I think Jolie deserves credit for it, however she shouldn’t have directed the movie. The movie needed a fresh set of eyes, a new look on the story, and someone to interpret it and develop it to its full potential. Unfortunately I think that Jolie, perhaps too involved in her project, failed to exploit certain traits of the movie that could really have made it poignant.

For a start it, is often unclear who is who in the movie: the Serbs, the muslims, who is being target and why, who are the bad guys who are the good guys? Second, it would seem that Jolie is trying to make the audience feel sorry for both sides: those who are being targeted as well as the soldiers. She does this by showing us moments when the soldiers are in battle, obviously scared and suffering loss on their side. However, this doesn’t really achieve its goal. Since the soldiers are so horrible the rest of the time, we feel that they only deserve what they get, furthermore, the scenes in which they are shown suffering do not last long enough for us to empathize.

Secondly, the love story is not at all exploited to its full potential. It is often unclear whether or not the two actually love each other, or whether they are just attracted to each other. We don’t know if Danijel loves Ajla, or if he is just using her as his personal belonging amongst the concentration camp full of beaten women. We are not sure whether Ajla enjoys Danijel’s company, or whether she is putting up with him as something better than being repeatedly raped by strangers.

This is a real shame, as their love story could have been much more touching and poignant for the audience. For example, had we seen a real passion and a real struggle from the two of them, to be together in dangerous moments and to hide their love from their friends and family, then their story would have seemed much more real. Unfortunately, I feel we remain rather confused and indifferent to their love.

Finally, the pace of the movie is sometimes a bit slow and events don’t follow each other fast enough, meaning that there are down times in which the audience can lose interest in the story. A repeated use of “fade in fade out” as a transition between shots does not help the disjointed feeling of the movie in which scenes do not always seem to fit together, and the loss of pace. One would have hoped that given Jolie’s means, she would have found a different way of transitioning than fading, which sometimes reminds us of our friend powerpoint.

All in all, the story has a huge potential and I think that Jolie wrote an excellent screenplay. I also like her use of local actors for the movie, making it feel more authentic. However, I think a lot was underexploited and I can only hope that several years from now another director will try their hand at this movie.