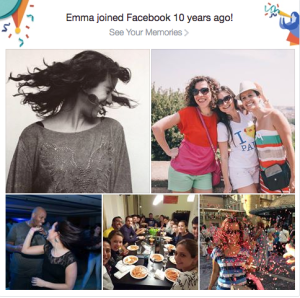 Nowadays, I hate Facebook! I’ve removed the app and messenger from my phone, and almost every time I check it I sort of resent it. Sounds extreme? Maybe, but as an early adopter (January 2006) I feel like it’s justified.

Today when I think of Facebook, I think of an intrusive marketing platform. I don’t think of it as a social network anymore, the main reason I joined in the first place: to keep up with what my friends were doing. Increasingly due to algorithm changes, when I log in I see random posts people have liked – probably sponsored – and occasionally an interesting update from a friend.

Mostly, every other post is an ad. An ad for something I’m not interested in like a nail salon, a dating website, or a store… “Why am I seeing this” tells me that it’s based on my recent location. Creepy? Yes! Especially considering I don’t allow location services. Once I deleted the app it told me it was based on where I last logged on to the internet. Yikes! Is there no privacy at all?

The other problem I have with it? The constant updates, including ones you don’t want and cannot get rid of, like the latest Facebook stories on messenger. If they want to update software why not, but user experience modifications you can’t opt out of surely don’t qualify as good user experience!

That’s notwithstanding Facebook’s quest for world dominance, starting with forcing us all onto messenger. Did you even notice that happen? Messenger’s now the second most popular messaging app behind Whatsapp, also owned by Facebook. Not a coincidence!

While Facebook’s usage numbers are on the rise, it would appear that I’m not the only one getting bored of it what it has become. Just the other day, I logged in to see a status from a friend with the exact same feelings as mine and a lot of the comments were reinforcing her status.

Beyond myself and my sphere, this article mentions that people are spending less time updating their statuses than they used to, and prefer more private apps where there are no ads. Other articles seem to agree, Facebook is losing its appeal as a simple “social network”. Instead of sharing status updates and pictures, people come to Facebook to consume “news” and get information, just not necessarily about their friends. Facebook has instead become two things: a media company and an advertising platform.

While its evolution is natural, and I can understand some of the reasons behind Facebook’s changes, I also believe it’s enough to make its original users like me, think twice about continuing to use it. It’s a shame that by privileging financial gain, companies end up falling out of touch with their consumers.

As someone who works in marketing & PR, and an avid listener of the P&R podcast, I try to constantly remind myself to put the consumer’s needs and interests first – before those of the companies I am working for.

If only Facebook could go back to that… If I didn’t already have a profile, I wouldn’t join. What about you? How do you feel about Facebook as it is today?

One thought on “Is Facebook still worth it? Personal edition”